The Flu Vaccine and Pregnancy

The influenza virus is a common but potentially dangerous illness and pregnant women are at a higher risk of contracting a severe case of the flu than the general population. Pregnancy naturally suppresses the immune system and stresses the heart and lungs in ways that cause pregnant women to be more susceptible to the flu, but a vaccine can safely protect women and babies from the illness and its complications. 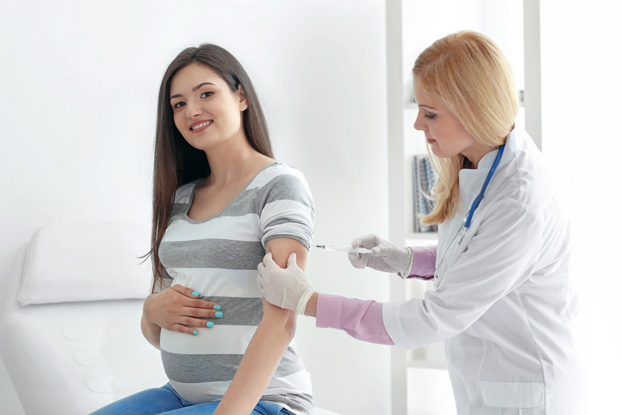 Influence, or the flu, is a highly contagious viral infection that causes fever, congestion, coughing, muscle aches, fatigue, vomiting and diarrhea. In healthy people, the flu can cause illness and discomfort for several days, but it can also lead to further illnesses such as ear and sinus infections. Occasionally, influenza causes more harmful complications such as bacterial pneumonia. In certain high-risk groups such as very young children and the elderly, or those with otherwise depressed immune systems, the flu can be fatal. Pregnant women fall into the high-risk category.

Risks of the Flu for Pregnant Women

Pregnant women and their babies are at particular risk for the catching the flu and suffering significant complications from the illness. According to the Center for Disease Control, some evidence suggests that contracting influenza while pregnant raises the risks of including birth defects and premature labor and delivery.

Influenza remains a particular risk to mothers and their newborns in the initial weeks after giving birth. Both new mothers and their babies have lower immunity to illness, so it is especially important to protect against contracting the flu in the early weeks and months after delivery while the mother recuperates from birth and the baby’s fragile immune system is developing.

Protect Yourself and Your Baby

Flu virus strains evolve from year to year so having had the flu previously or receiving a vaccine in years past will not protect against influenza in the future. The best way to prevent the flu is to receive the vaccine every year. It is recommended that women get vaccinated at any point in their pregnancy as there are no increased benefits or concerns if the vaccine is received either early or late in the pregnancy. However, pregnant women should only be vaccinated via the flu shot and not the nasal spray.

If a woman did not receive a flu shot while pregnant, it is still safe to get one while breastfeeding. Infants under six months of age cannot be vaccinated against influenza so it is essential to prevent the mother from contracting the flu so she will not pass the illness on to her child. For this same reason, any other family members living with a newborn should also get vaccination against the flu.

Is the Flu Shot Safe for Pregnant Women and the Babies?

Studies show that the flu vaccine is safe for both pregnant women and fetuses. In 1998 a now discredited hypothesis suggested a possible link between some vaccines and autism, but investigations found evidence that the controversial study was based on false data and its findings were retracted. Multiple peer-reviewed studies also confirm that vaccines do not cause developmental disorders in children including a recent study published in the journal JAMA Pediatrics in which researchers with Kaiser Permanente’s Autism Research Program found no statistical evidence with the flu vaccine and a risk to children of developing autism. Further research is ongoing, but there is no current change to vaccine guidelines and it is strongly recommended that all pregnant women receive a flu shot at some point during their pregnancies.

Side Effects of the Flu Shot and Allergy Concerns

There are some side effects associated with the influenza vaccine and they are the same for pregnant women as they are for the broader population. It is common to experience soreness and swelling at the site of the shot and some people report mild fever, headaches, fatigue, or possible nausea, but symptoms are significantly decreased than if the actual infection is contracted and they lessen significantly after one or two days.

If a person has an egg allergy they can usually receive the vaccine unless the allergy is so severe as to be life threatening. It is advisable for people who have a history of allergic reactions to any vaccine to discuss their options with their doctor before receiving a flu shot.

Flu Shots are Easy and Effective Against Illness

Influenza is a highly contagious illness with the potential for dangerous and even life-threatening complications, but the flu shot is a simple way to keep pregnant women and their babies healthy. There is no medical reason to delay or forgo the vaccine at any point during pregnancy and a quick flu shot provides both actual protection against the viral infection and peace of mind.

If you have any questions about the influenza vaccine, please contact Kansas City ObGyn today at This email address is being protected from spambots. You need JavaScript enabled to view it. or 913-948-9636.