By now you’ve heard the news about the Zika virus and if you’re pregnant, you may be worrying for two (or more!). We’ve been getting a lot of questions from expecting mothers about the nasty-sounding bug, and we wanted to address your concerns and give you some tips to avoid the dangerous Zika virus.

What is Zika virus?

The Zika virus is contracted from Aedus -- the mosquitos that also carry yellow fever and dengue mosquito bites. In 1947, scientists found monkeys that carried the disease in the Zika Forest of Uganda. For most people the symptoms of the Zika virus are relatively mild.  It should be noted that severe illness or death from the Zika virus is extremely rare, but the potential complications for pregnancies and babies is quite serious.

Where am I at highest risk for Zika virus? How do I prevent it?

While 349 Zika cases have been reported in the United State at this point, all of those cases came from visitors from the following Central and South American countries and territories:

The CDC advises against visiting these Central and South American countries that are combatting the mosquito-borne Zika virus problem, especially if you’re pregnant or may become pregnant. If you do travel to these countries, it is strongly advised to wear long clothing, consistently apply bug spray, and avoid spending prolonged time where you are likely to be exposed to high volumes of mosquitoes like low elevations or standing bodies of water.

I’m pregnant. Should I be worried about Zika?

Zika reared its ugly head in South America in May 2015 with Brazil receiving most of the press, and for good reason: the tropical country reported thousands of cases of severe birth defects. In mid-April 2016, the CDC announced that the virus could cause severe brain defects like microcephaly, a neurological condition that causes babies to be born with small heads and sometimes small brains.

The virus is not airborne, so do not stress about potentially contracting the disease by standing near someone who has the disease. Other than a bite from a mosquito carrying Zika, sexual contact or other transmission of bodily fluids so far appears to be the only other way to contract the virus, according to the World Health Organization (WHO). As of today, six cases of sexually-transmitted Zika have been reported in the United States according to the CDC. For now, Zika is mostly relegated to other countries. There is presently no vaccine for the virus.

Is Zika virus making its way to the U.S., and am I at risk in Kansas City?

Experts at the WHO anticipate that the Zika virus will spread to nearly every country in the Americas (North, South and Central). That’s because the Aedus mosquitoes, which transmit the virus through their bites, are found in all countries in the Americas, including the United States.  At this time, it is not believed to be likely that the virus will become a significant threat in Midwestern cities like Kansas City.

Experts say the Zika virus is unlikely to spread far outside tropical areas. Regions of the southern U.S. will probably not see an outbreak until the summer when mosquitoes are more active. Even if that does happen, experts believe the spread of the virus will likely be more contained than it has been in South and Central America because most people have window screens, air conditioning and easy access to bug repellant -- three important ways to help prevent the risk of mosquito bites.

Because of the serious nature of the Zika virus’ potential to impact an unborn baby, the CDC recommends pregnant American women use an “abundance of caution.” According to the CDC, expectant moms in any trimester or women hoping to become pregnant should consider postponing travel to any area Zika virus transmission is continuous -- see above list of countries. The WHO has also issued the same recommendation.

Pregnant women and those trying to become pregnant who do plan to travel to one of these areas should talk to your OB/GYN or prenatal practitioner before going on your trip. Most important, please strictly follow steps to prevent mosquito bites. 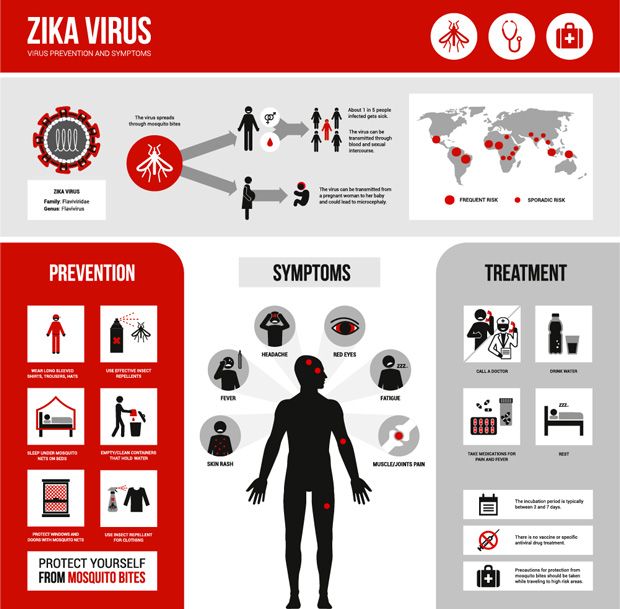 What should I do if I’ve traveled to areas with Zika virus?

The CDC recommends any pregnant woman who has traveled to or lived in a country with Zika see their doctors to be screened for the virus. Are you concerned because you traveled to one of these countries and have since conceived? The CDC says the virus usually remains in the blood of an infected person for a few days up to a week, so it’s a potential worry for a short period of time. Fortunately, Zika virus typically does not cause infections in a baby that is conceived after the virus is cleared from the blood, so an infection poses little to no risk of birth defects for future pregnancies.

How do I get tested and treatment for Zika virus?

Zika virus testing is simple to complete, and if test results are positive, your doctor may choose to run additional testing to check your baby for infection. Depending on the exposure and symptoms, you might have ultrasounds to scan for signs of microcephaly even if blood testing is negative.

While there may be cause for concern if you’ve traveled abroad recently, the risk is very low for Kansas City women to contract the Zika virus. However, when it comes to your pregnancy, we understand the need for great caution and care.

If you have any other or concerns about the Zika virus and your pregnancy or potential pregnancy, don’t hesitate to contact Kansas City Ob/Gyn today at This email address is being protected from spambots. You need JavaScript enabled to view it. or 913-948-9636.