What is Gestational Diabetes?

Gestational diabetes occurs only while a woman is pregnant. The disease usually develops in the second trimester, after the 24th week of pregnancy if the woman was not already diabetic. Studies reported by the Centers for Disease Control estimate anywhere from two to 10 percent of pregnant women in the U.S. develop gestational diabetes every year. The rate was 9.2 percent in the 2014 CDC report. 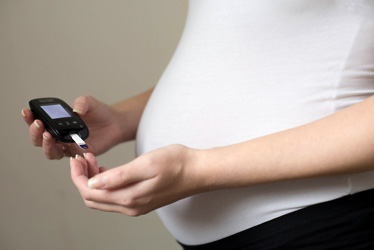 Diabetes, including gestational diabetes, occurs when the body does not efficiently process food into glucose, or blood sugar. The pancreas makes insulin, a hormone which helps the body do this efficiently or use glucose for energy like it should. When the pancreas produces insufficient insulin, or the body cannot use the insulin it creates in the way it should, diabetes is the result.

When a woman is pregnant, the placenta that supports her baby also secretes hormones. Some of these hormones block the action of insulin from the mother, creating a condition called insulin resistance.  Insulin resistance makes it harder for the mother’s body to use her insulin, and she may need up to three times the insulin she would otherwise. Without enough insulin, her body cannot take the glucose from the food she eats and turn it into energy. The glucose builds up in her blood to dangerously high levels, called hyperglycemia (high blood sugar).

Chronic problems controlling insulin levels or blood sugar levels are the disease of diabetes. It can cause organ damage and other issues in the mother as well as problems for the baby

What are the Signs or Symptoms of Gestational Diabetes?

Most women never show signs or symptoms of gestational diabetes. Good prenatal care includes screenings for the disease at about the 24th week to detect rising blood sugar levels, which is usually the most reliable indicator of the illness. If the first test results are positive, the doctor will run a second test, called a glucose tolerance test, to verify the patient has gestational diabetes.

What are the Causes or Risk Factors for Gestational Diabetes?

Doctors have not isolated a single cause of gestational diabetes, but they have identified some risk factors. However, some women with no risk factors also develop the condition. All pregnant women develop some insulin resistance because hormonal changes and weight gain make them less able to use insulin to process blood sugar.

A woman who develops gestational diabetes has a 66 percent greater chance of having it again in another pregnancy. Sometimes, pregnancies uncover pre-existing Type 1 or Type 2 diabetes that had merely gone undetected before. It can be hard to tell which was the case.

Some risk factors that make a woman more likely to develop gestational diabetes include:

What is the Treatment for Gestational Diabetes?

Because gestational diabetes can harm both the mother and the baby, it is essential to treat it as soon as it is discovered.  Treatment involves working to return blood sugar levels to normal through diet, exercise and medication when needed. 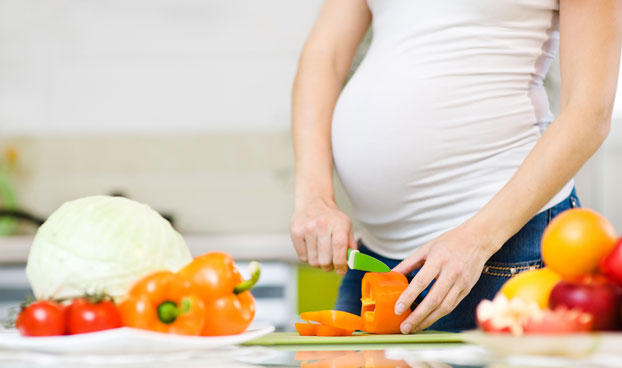 If possible, seek care before becoming pregnant, including losing weight, controlling blood sugar and getting control of other health issues. If gestational diabetes is detected, the doctor may refer the woman to an endocrinologist, who specializes in treating diabetes. Additional help may come from diabetes educators and dietitians.

If the gestational diabetes is not controlled, it can affect the placenta and the nutrients it delivers to the unborn baby. The disease can affect the health of the baby.

If the gestational diabetes is difficult to control, it may affect the placenta and endanger the delivery of nutrients and oxygen to the baby. The doctors will closely monitor the baby’s health with ultrasounds and other tests. These may include “kick counts,” where the mother records the movements of the unborn baby, nonstress tests in which a sensor belt monitors and records the fetal heart rate, and a fetal biophysical profile.

The mother must also continue her diet and exercise plans to stay healthy. As many as 20 percent of women with gestational diabetes must take insulin to control their blood sugar during pregnancy. The doctor will want to monitor carefully how much weight the mother gains during pregnancy.  She should not try to lose weight while she is pregnant, but excess gain or gaining weight too fast makes it harder to control blood sugar levels.

What are the Implications of Gestational Diabetes for Mom and Baby?

In some cases, women with gestational diabetes develop high blood pressure or even preeclampsia, a sign that her kidneys and liver are not working properly. Preeclampsia may result in risk to the health of the mother or the baby and may require the baby be delivered early.

Most women with well-controlled gestational diabetes can carry their babies to full term, though.

The mother’s insulin does not cross the placenta, but her blood sugar along with oxygen and other nutrients do to feed her growing baby. When the mother’s insulin system isn’t working properly, too much glucose – sugar – goes to the baby, causing the baby to have high blood sugar levels. The extra sugar makes the baby’s pancreas create extra insulin to deal with the excess blood sugar. The baby has more energy from glucose than it needs to grow and develop, so the extra energy gets stored as fat.

This condition is called macrosomia. Babies with macrosomia often have multiple problems at birth, including potential damage to their shoulders as they try to pass through the birth canal. Their pancreas making extra insulin can cause them to have very low blood sugar levels at birth, which may even lead to seizures. These babies may also have breathing problems, and they are at a higher risk for obesity and Type 2 diabetes as adults.

These large babies may injure their mothers if they are born vaginally. Problems include vaginal tears and heavy bleeding after birth. Often, they must be delivered by C-section. If the mother’s blood sugar rises, she may go into early labor, or her doctor may have to deliver the baby early because of fetal distress or risks to the mother. Premature infants often have respiratory distress syndrome. They may require assistance to breathe until their lungs mature. Even babies born at their due date but with low blood sugar can experience respiratory distress syndrome, too.

In some cases, a baby born to a mother with gestational diabetes may have jaundice, an excess of liver toxins in its blood, because the liver has not fully developed. In the worst-case scenarios, stillbirths can occur.

How Can I Prevent Gestational Diabetes?

There is no guaranteed way to prevent gestational diabetes. However, a woman with healthy eating habits who exercises regularly and maintains her weight within recommended guidelines before and after becoming pregnant has the best chance of avoiding the disease. Good prenatal care, including early testing for gestational diabetes if you had it during previous pregnancies or know you are at high risk, is also important.

Once you get pregnant, continue to eat a well-balanced diet and get regular exercise. Follow your doctor’s guidelines about how much weight to gain and how quickly you should gain it. Get regular prenatal care, including blood sugar testing, to keep track of any blood sugar issues.

Limit the fat in your diet to under 30 percent of your daily calories, watch portion sizes, and try to cut out added sugars.  Keep exercising regularly if your doctor approves of physical activity. Exercise lets your body utilize glucose for energy without having to produce extra insulin and helps you fight insulin resistance that can lead to gestational diabetes.

If you are concerned about gestational diabetes or have been diagnosed with gestational diabetes already and would like help managing your prenatal care, contact us today at This email address is being protected from spambots. You need JavaScript enabled to view it. or (913) 948-9636.