Preeclampsia is a serious condition that develops only in pregnancy, usually after the 20th week of gestation.  In preeclampsia, the mother’s blood pressure rises to dangerously high levels, which can damage her blood vessels and arteries. This restricts blood flow throughout her body, including to her brain and her baby. If left untreated, preeclampsia can cause damage to multiple organs in the mother’s body.

When preeclampsia occurs before the 32nd week of pregnancy, doctors call it early-onset preeclampsia. Usually, the condition occurs later in the third trimester. The mother’s kidneys and liver are most prone to damage from the disease. If not treated, preeclampsia can result in severe or even fatal complications for the mother and the baby. 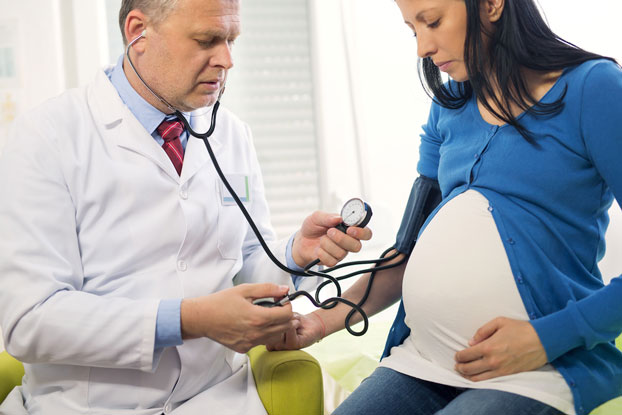 Eclampsia is a severe complication of preeclampsia, in which the swelling of blood vessels due to high blood pressure becomes so severe that it causes seizures and interferes with the mother’s brain function. Eclampsia occurs in approximately one in 200 cases of preeclampsia. It can happen even in women with no history of seizures.

What are the causes of preeclampsia?

Some women have a higher risk for developing preeclampsia, including those with:

Doctors believe preeclampsia is related to problems with the placenta, which is where the fertilized egg has attached to the uterus. In a typical pregnancy, new blood vessels develop here to send blood and nutrients to the developing baby through the placenta. However, in women with preeclampsia, those blood vessels do not seem to develop properly or function as well. They seem to be narrower, and they react differently to hormones secreted during pregnancy. The result is that less blood can flow to the growing baby.

Mayo Clinic researchers believe this abnormal placental blood vessel development may be due to causes such as:

How do doctors detect or diagnose preeclampsia?

A pregnant woman can have preeclampsia that leads to eclampsia. She can have symptoms of both. Sometimes, the signs of preeclampsia can be the result of other medical conditions like diabetes or kidney disease.

Preeclampsia can also develop with no prior symptoms or risk factors. High blood pressure can appear gradually or have a sudden onset. Doctors monitor blood pressure at every prenatal visit because one of the first signs of preeclampsia is rising blood pressure. Another common sign is protein in the urine, indicating kidney problems.

As symptoms worsen, the woman’s platelet count in her blood may drop, her kidneys and liver may not function well, she may develop fluid in her lungs, have severe headaches, experience vision changes, and pain in her upper abdomen. If her condition progresses to eclampsia, she may experience agitation, seizures and loss of consciousness. 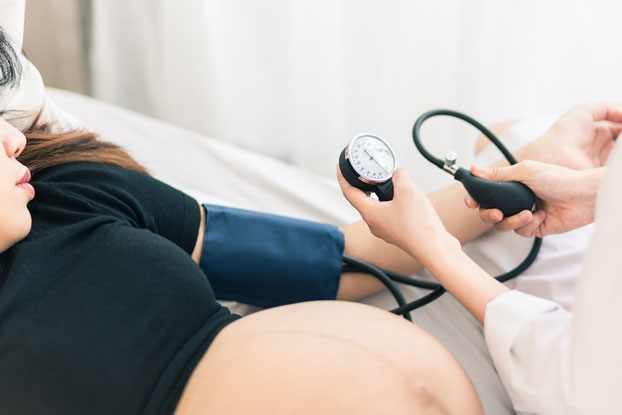 If a pregnant woman develops preeclampsia, what are the implications for mother and baby?

Preeclampsia can result in severe complications to both mother and baby. It affects how oxygen, blood and nutrients are delivered from mother to baby through the placenta. The high blood pressure reduces the blood flow and can lead to low birth weight or other health problems for the baby. It can become so dangerous for the mother that the baby will have to be delivered before the due date to prevent a medical crisis or even death.

If the baby is near full term, the doctor may decide to induce labor or perform a C-section. Earlier in the pregnancy, the mother and doctor need to weigh the risks of carrying the baby to term against the dangers of the preeclampsia continuing, along with the risks of complications, organ failure, premature birth or worse. If the baby is at 33 weeks or beyond, the doctor may recommend immediate delivery if severe preeclampsia develops. The doctor may give the mother steroids for 48 hours to help the baby’s lungs develop before delivering a baby that is between 33 and 34 weeks gestation.

Any time serious complications such as seizures, kidney failure or liver failure seem imminent in the mother, or the baby seems to be in distress, the doctor will recommend immediate delivery of the baby. The more severe the preeclampsia symptoms and the earlier in the pregnancy they occur, the higher the risks for both mother and baby.

The Mayo Clinic lists some of the significant consequences of preeclampsia, beyond the organ damage to the mother and the risk of premature birth.

Fortunately, the National Institutes of Health (NIH) reports that 75 percent of preeclampsia cases are mild. However, the illness can progress from mild to eclampsia with seizures in just days. Pregnant women rarely die of preeclampsia in first-world countries. However, preeclampsia still accounts for a significant number of maternal deaths around the world.  The World Health Organization (WHO) reports the illness causes 14 percent of maternal deaths annually, totaling 50,000 to 75,000 globally as estimated by the NIH and WHO studies.

Mothers who experience mild or uncomplicated preeclampsia usually see their blood pressure return to normal and their other symptoms disappear within six weeks of delivery. Unfortunately, women who have had preeclampsia are four times more likely to develop high blood pressure later in life, and they are twice as likely to develop heart disease which can lead to heart attacks, blood clots in veins, or strokes, as are women who did not have preeclampsia in their pregnancies. In rare cases, women can experience permanent damage to their kidneys, liver or lungs from the disease.

The NIH reports risks to the baby as including:

How do doctors treat and manage preeclampsia during pregnancy?

Mothers diagnosed with preeclampsia can expect to have more frequent prenatal checkups, including blood pressure checks and fetal monitoring. They may receive blood pressure medication, bed rest and close monitoring of the baby’s activity.

It can be difficult to know if some symptoms are problematic or not, especially if this is the first pregnancy. The Mayo Clinic advises women to go to the hospital or contact their doctor if they have a severe headache, blurry vision or other vision changes, severe abdominal pain or shortness of breath.

How the doctor manages the preeclampsia is determined by how far along the pregnancy is, and the severity of the preeclampsia symptoms. If symptoms are mild, a doctor might treat them with bed rest to lower blood pressure and improve blood flow to the placenta. Sometimes, the doctor may prescribe anticonvulsant medication to the mother if blood pressure is high enough to cause a risk for seizures.

A mother with preeclampsia will probably receive tests of her blood and urine to check for progression of the disease. Tests will check for protein in her urine, check liver and kidney functions and platelet counts in her blood. The doctor will also monitor the baby through ultrasound, heart rate monitoring, amniotic fluid tests and measuring the baby’s growth.

If the condition is severe enough, the mother may have to be admitted to the hospital for close monitoring and treatment. She may receive IV medicine to control her blood pressure, prevent seizures, and to receive steroids to help her baby’s lungs develop faster.

A woman with severe preeclampsia will probably be encouraged to deliver her baby as soon as possible once she is at 34 weeks, according to ACOG. Before 34 weeks, she is likely to receive steroids to help with the baby’s lung development before delivery. Even then, the baby may have to be delivered early despite the likelihood of complications for the baby because of the high risk for severe problems for the mother due to the preeclampsia.