Is Tubal Ligation Right For You? 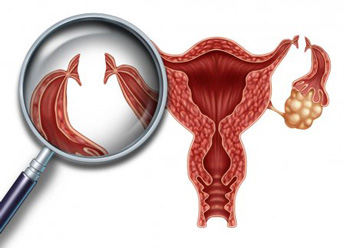 Tubal ligation (“tubes tied”) is a surgical procedure that many women elect to have done after they have decided they are done having children. It is categorized under permanent birth control, making the decision to have your tubes tied not a light or easy decision for many.

In the procedure, your fallopian tubes are either cut, tied or blocked to prevent pregnancy. This process prevents an egg from traveling from the ovaries to the uterus, where it could potentially be fertilized by sperm. Tubal ligation can be done anytime, including after childbirth and in combination with other abdominal surgeries, such as C-section. Once it has been performed, reversal/reversibility is quite difficult and, at times, impossible, requiring major surgery.

The Pros and Cons of Tubal Ligation

Many of the pluses and minuses of this permanent birth control are the same. For example, if you are done having children the permanence is a huge benefit over other birth control methods. However, if you still want to expand your family, that tubal ligation is permanant removes it as a birth control option. Unlike many other forms of birth control, tubal ligation is non-hormonal and once you recover from the low-risk surgery, there are very few risks. Additionally, this procedure may also decrease your risk of developing ovarian cancer, particularly if your fallopian tubes are removed, making it an attractive option to women at higher risk.

If you are sexually active with more than one partner, it’s important to know that tubal ligation will not protect against sexually transmitted diseases. Therefore, it is not a recommended option for women not married or in a monogamous relationship. The actual procedure to get your tubes tied carries a small risk of complication, which your surgeon will discuss with you if you. Additionally, there is a risk of ectopic pregnancy after tubal ligation.

Tubal ligation is done laparoscopically as often as possible. Sometimes this procedure is outpatient and sometimes you need to spend a day or two in the hospital following surgery. Tubal ligations immediately after childbirth are often done by accessing the uterus through the vaginal canal. It is also possible to have your tubes tied immediately after a cesarean section.

Recovery after tubal ligation varies depending on age and previous health, but in many cases, this is an outpatient procedure and you can go home the same day as the procedure. There may be some discomfort at the incision site and abdominal pain. Your doctor will speak with you about short term pain management options. Fatigue, dizziness, gassiness/bloating and back pain are also common side effects. It’s important to avoid heavy lifting, rigorous physical activity and sex until your doctor advises that it is safe to resume normal activities. Failure to do so may result in infection and further complications.

Is Tubal Ligation Right For Me?

Permanent birth control is a very individual choice. It is important that each woman, and couple, consider the risks and benefits, and that they are positive they no longer want children. Tubal ligation is rarely reversible so it is important that you won’t regret the decision. All in all, getting your tubes tied is a safe and effective procedure and is often the right form of birth control for many women to attain peace of mind about family planning and their health.

At Kansas City ObGyn we want to support you in your family planning. This email address is being protected from spambots. You need JavaScript enabled to view it. today or call (913) 439-3728 to schedule an appointment to discuss birth control options.

Dr. J. Anthony Heit, MD is one of the founding physicians at Kansas City ObGyn. Dr. Heit is well-known for his careful and thorough approach to medicine, and is proud of the low complication rates he has achieved. Originally from Topeka, Dr Heit is a family man and is happily married and has four children.