Tubal Ligation is a surgical procedure that permanently prevents pregnancy. It is also casually known as “getting your tubes tied,” and involves the cutting or blocking off of the fallopian tubes.  This stops the egg from traveling from the ovary to the uterus so fertilization and implantation cannot occur.

Tubal ligation is a relatively simple surgery. It can be done at any time, including immediately after giving birth, and many women prefer to have it done as part of a Cesarean section procedure.

During a standard tubal ligation, either general anesthesia or a spinal block is administered. If the operation is not part of a C-section, the surgeon makes two small abdominal incisions and inserts a small camera mounted on the end of a tube called a laparoscope. The abdomen is then inflated with gas, allowing greater visibility and access. The surgeon will then cut or cauterize each of the fallopian tubes and clamp or tie them off.

After a tubal ligation, women can usually go home on the same day as the surgery. However, the effects of the anesthesia will require a family member or friend to help with driving and getting the patient settled at home.

In the days following the tubal ligation, it is very important to allow the body time to heal. There is often some localized abdominal pain around the incisions for which a doctor may prescribe painkillers, and some women may experience cramping, dizziness, fatigue, bloating, gassiness or shoulder pain.

Women should contact their doctor if they have a temperature of 100.4° F or greater, if they experience pain and/or bleeding or discharge from the incision site that continues or increases 12 hours after the operation, or if they have fainting spells.

Women can expect to resume to normal activities almost immediately after the surgery unless there are other factors such as needing to recover after Cesarean section, but if the tubal ligation is done in conjunction with giving birth, it should not add to the length of hospital stay. Heavy lifting and sexual intercourse should be delayed for two to three weeks after the surgery to ensure a full recovery. 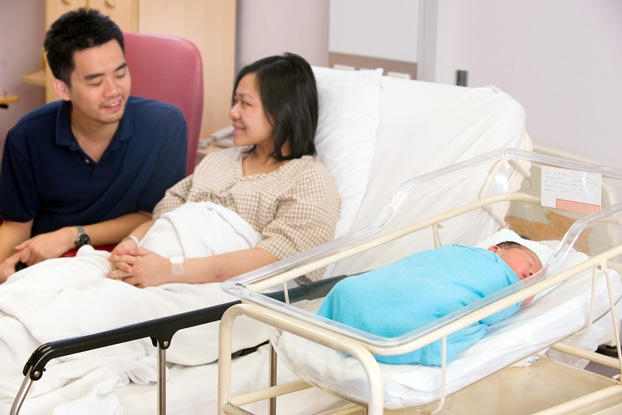 If the tubes have been tied using the laparoscopic method, there is no need for further tests to ensure efficacy and women can end other forms of birth control immediately. However, if the tubes were tied via a hysteroscopic tubal occlusion, women should continue using contraceptives for three months.  After three months a test called hysterosalpingogram will confirm the surgery was effective.

Benefits and Risks of Tubal Ligation

Tubal ligation is a common, low-risk surgery that provides permanent birth control. For women who are sure they want to prevent any future pregnancies, it is approximately 95 to 99 percent effective, although rates vary according to the type of surgery performed. Tubal ligation also has the additional benefit of lowering the risk of ovarian cancer. For that reason, some women with a history of ovarian cancer may opt to have their tubes tied as a preventive measure against the disease.

Tubal ligation is not recommended for women who are not absolutely positive they want to prevent the future pregnancies. In some cases, reversing the procedure is possible, but it is expensive and rates of conception are often decreased and In Vitro Fertilization (IVF) may be necessary. There is also a slight increase of ectopic pregnancies after a tubal ligation and the procedure does not protect against sexually transmitted disease (STDs).

Tubal ligation is not an appropriate form of sterilization for everyone. Women who have had previous abdominal surgeries, diabetes, or are obese tend to have a higher risk of complications related to getting their tubes tied. Women should discuss their options with the doctor to decide if the surgery is right for them.

A relatively rare but serious complication of tubal ligation is a condition called Post Tubal Ligation Syndrome (PTLS). PTLS occurs when the blood supply to the ovaries is damaged during the operation to tie the tubes. The result of PTLS is a significant decrease in the production of the hormones estrogen and progesterone. This can have lasting health effects, including symptoms similar to those of menopause. Women in their 20s appear to be at a higher risk for PTLS than women who have tubal ligations in their 30s and 40s.

Side Effects of Tubal Ligation

Many women may worry about side effects after tubal ligation. Generally, these are rare or have been shown to be related to issues other than the surgery.

Pregnancy, or failure of the tubal ligation, is one potential unwanted side effect of the procedure. Women who have had their tubes tied are slightly more likely to have ectopic, or tubal, pregnancies than other women. The U.S. Centers for Disease Control and Prevention studies show approximately one in 200 women will experience pregnancy after having their tubes tied. Of these, less than seven out of 1,000 of the pregnancies will be ectopic, but that number is still higher than the rate of ectopic pregnancies among non-sterilized women. Research conducted over an eight to 14-year period by the U.S. Collaborative Review of Sterilization and published in 2015 showed pregnancy happened in only 143 of the 10,685 (1.33%) women studied.  Women who were under age 30 when they had the procedure had a higher failure rate.

Post-Tubal Ligation Syndrome (PTLS) is a cluster of symptoms reported which include heavy or missing menstrual periods, hormonal problems, or problems that may mimic menopause. Its existence remains controversial among doctors and researchers.  Women reporting PTLS list side effects such as hot flashes, heavy periods, mood swings, anxiety, depression, sleep problems, fatigue, mental “fog” or confusion, and vaginal dryness, among others.

Some doctors feel that a loss of blood flow to the severed fallopian tubes is to blame, while others suggest women who were using birth control pills prior to surgery may be more likely to experience PTLS. They experience symptoms from stopping the contraception, rather than the result of the surgical procedure. Dr. Stephen L. Corson, professor at Thomas Jefferson University and Women's Institute in Philadelphia, conducted a study comparing hormone levels in women who had tubal ligations versus those who had not had the surgery. He found no significant differences in the hormone levels of the groups, indicating no damage to the ovaries from tubal ligation surgery. Other studies, including one by the American Society for Reproductive Medicine, also failed to support the existence of PTLS.

Another side effect that may concern women is the reported connection between tubal ligation and the risk of future hysterectomy. Clinical studies published in the Journal of Obstetrics and Gynecology show a statistically small increase in hysterectomies in sterilized women in the U.S. The researchers hypothesized this was due to the sterilized women’s lower threshold for being willing to undergo a hysterectomy rather than the presence of other factors. American Family Physician points out that hysterectomy rates are higher in the U.S. than in the rest of the world. They state, “For women who were sterilized before the age of 30, a plausible biologic effect of sterilization on hysterectomy risk is unlikely.” Findings from studies in other countries do not report the same increased risk for hysterectomy after tubal ligation as that seen in the U.S.

Women considering tubal ligation may worry about increasing their risk for ovarian cancer or breast cancer, or an increased risk for other diseases. However, the Collaborative Review actually saw a reduction in rates of ovarian cancer in patients who had tubal ligation surgery both in the U.S. and in other countries, and they found no relationship between breast cancer and tubal ligation. The rates for pelvic inflammatory disease also decreased in women who had their tubes tied. When P.I.D. abscesses do occur, fewer sterilized patients required hospitalization for treatment than did their un-sterilized counterparts.

Regret is perhaps the side effect of tubal ligation most discussed among women and their doctors before surgery. Common factors associated with regret, according to the report in American Family Physician, include a young patient and unpredictable life events. Pressure from spouses, doctors, relatives, and others also influence whether a woman feels regret about her decision to seek permanent birth control through tubal ligation.

In the Unites States, tubal ligation is more common than vasectomy; however, vasectomies are usually cheaper than tubal ligations and have even fewer associated complications.

People who are in a committed relationship and are sure they do not want to have children in the future should consider the pros and cons of getting a tubal ligation or a vasectomy. The risks for each person and their personal medical history should be carefully considered.

Choosing to have a tubal ligation is a personal decision that should be considered carefully. For women who are sure they do not want to have children in the future and want to have full control of their reproductive health, getting their tubes tied is a safe and effective option.

If you have any questions about whether a tubal ligation procedure is right for you, please contact Kansas City ObGyn today at This email address is being protected from spambots. You need JavaScript enabled to view it. or 913-948-9636.