Symptoms of Menopause and Perimenopause, and How to Cope

Menopause is often regarded in the broader culture as a mysterious condition that afflicts all middle aged women with mood swings and dramatic hot flashes. But that is a simplistic caricature of an important and normal biological process in every woman’s life.

The word “menopause” is often used as an umbrella term for a natural condition that is comprised of several distinct stages which commonly take place over the course of a few years. In its simplest terms, menopause describes the permanent cessation of a woman’s menstrual cycle, but the entire process of menopause is about more than just the end of periods. It is helpful to think of menopause as the inverse of puberty. If puberty marks the beginning of a woman’s reproductive years, menopause marks its end. 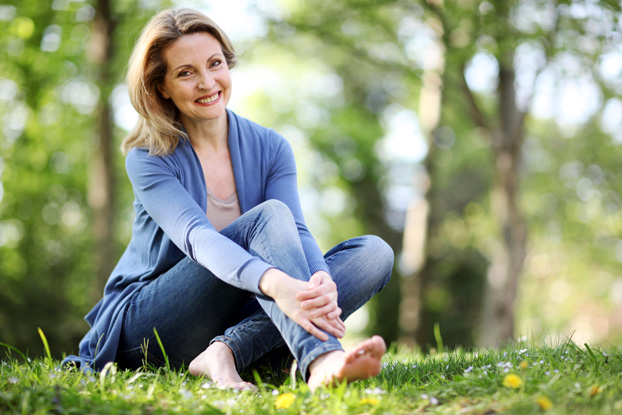 As women age, the ovaries no longer produce the hormones estrogen and progesterone as they once did, and this drop in hormone level causes periods to stop. For most women, menopause takes place between the ages of 40 and 60 years old. Among American women the average age is 51.

There are three main stages to menopause: perimenopause, menopause and post-menopause.

Perimenopause is the first stage of menopause and it can begin a few years before a woman has her last period. Perimenopause occurs when hormone levels in the body begin to decline. During this time, a woman might experience many of the symptoms associated with menopause, such as decreased fertility, hot flashes and mood swings. However, while fertility rates do fall during this time, it is still possible to get pregnant during perimenopause, so women should consult their doctor before going off of birth control.

Menopause follows perimenopause, and it describes the condition when a woman’s menstrual cycle stops permanently. A woman is considered to have reached menopause 12 months after her last period, and this marks an end of her natural reproductive years.

Post-menopause is the point after menopause when the ovaries shut down and their hormone production stops. This does not mean hormone production ceases entirely in the body because hormones are produced in other places besides the ovaries, but overall levels do decline. Since hormones affect many parts of the body and not just the reproductive system, other health issues may arise in post-menopausal women. Bone density and cholesterol levels often change after menopause and many women experience other physical differences such as changes in muscle tone, hair thickness, and shifts in metabolism.

Post-menopause can be medically verified by having your follicle stimulating hormone (FSH) level measured. As ovaries begin to shut down, this level will rise significantly. It can be measured with a blood test.

Occasionally, some women may experience menopause prematurely. This condition is called Primary Ovarian Insufficiency (POI). A woman is considered to experience POI when menopausal symptoms begin before the age of 40. The condition is relatively rare and its causes vary. Biological factors, chemotherapy, hysterectomy and autoimmune diseases are some of the reasons a woman might experience early onset menopause. If a woman thinks she is experiencing premature menopause, it is very important that she talk with her doctor.

Not everyone experiences menopause in the same way. Some women have very pronounced symptoms throughout menopause and find them to be uncomfortable and personally disruptive. For other women, though, symptoms may be subtle or come on gradually.

Common symptoms of menopause include:

If a woman finds that her symptoms are interfering with her daily life, she should speak to her doctor, but even if she considers her symptoms to be manageable on her own, it is still important to schedule regular doctor’s visits starting in perimenopause in order to benefit from preventative care and medical screenings.

In post-menopause, many of these symptoms often decrease or disappear altogether, although some may be ongoing.

Menopause is often associated with its unpleasant symptoms, but there are also benefits. It is a new phase in life when women get to say goodbye to the inconvenience of periods, the anxiety of an unwanted pregnancy, uncomfortable PMS, and the need for birth control.

Menopause often coincides with the time in women’s lives when they feel like they are coming into their own. With the reproductive years in the rearview mirror, menopause is the body’s natural way of acknowledging that women have a lot to offer other than responsibilities associated with childbearing. The years after menopause are a great time to embrace life in new and exciting ways.

Starting to see signs of menopause, or concerned about how to better manage your menopause symptoms? Contact your physician at Kansas City ObGyn to schedule an appointment at (913) 948-9636 or by email.