4 Abnormal Types of Menstrual Period: Signs to Watch For

With each menstrual cycle, the uterine lining (endometrium) prepares itself for fetus development. If fertilization fails to happen, the body discharges the endometrium during the cycle, which typically lasts for about three to eight days. While the severity and duration of the menstrual periods are not the same for every woman, it is abnormal when the periods are too light, too heavy, occur too often, last longer, irregular or occur after menopause.

Some causes of irregular bleeding are not consequential. A number of things can cause the abnormality. These may include hormone-based birth control, infection of the uterus lining or cervix, STI, blood clotting disorders, and other health conditions.

PMS is an unpleasant, but typically normal, symptom that women experience during the menstruation cycle. The symptoms may last for a few hours to several days, and the intensity and variety of the symptoms differ from woman to woman. Premenstrual Dysphoric Disorder (PMDD) is the most prevalent form of PMS. It affects approximately 5 percent of women at reproductive age.

Women may experience PMS because of fluctuation of progesterone and estrogen levels during the cycle. The genetic makeup of some women may also trigger PMS. Also, women who are susceptible to PMS tend to have lower serotonin levels.

The American College of Obstetricians and Gynecologists estimates that 85% of women experience at least one PMS symptom during their reproductive age. Even though symptoms may vary in individuals, the most common ones include the following:

Most forms of PMS do not require medical treatment. Simple changes to one's lifestyle can also reduce or eliminate the intensity of the symptom. These could include:

When do periods change from normal to abnormal? Below are four of the most common types of abnormal menstrual periods.

Menorrhagia is one of the most prevalent types of menstrual bleeding. The condition is characterized by prolonged, heavy bleeding. In some instances, the bleeding may disrupt normal daily activities. There are different forms of this condition. The most common ones are polymenorrhea (too frequent), postmenopausal (menstrual periods after menopause), and metrorrhagia (bleeding between periods).

While there are many causes associated with menorrhagia, the most common causes include the following:

The main symptoms of this condition are the frequent need to change sanitary pads during the day, or when the menstrual period lasts more than seven days. Other prevalent symptoms include bleeding or spotting during pregnancy or between menstrual periods.

A medical professional will diagnose menorrhagia after ruling out other menstrual bleeding disorders, as well as the medication or medical conditions that may aggravate the condition. The doctor may also perform other diagnostic procedures such as blood test, Pap test, biopsy, magnetic resonance imaging, laparoscopic (a thin tube inserted into the abdominal wall), ultrasound and hysteroscopy.

After the diagnosis, the doctor will take into consideration other factors such as age, overall health, the severity of the condition and current symptoms to determine the treatment plan.

Dysmenorrhea is a condition characterized by pain and menstrual cramps during menstruation. The conditions can be described as either primary or secondary, depending on the causes. For primary dysmenorrhea, an individual experiences abnormal uterine contractions as a result of a chemical imbalance. Secondary dysmenorrhea is usually associated with medical conditions. 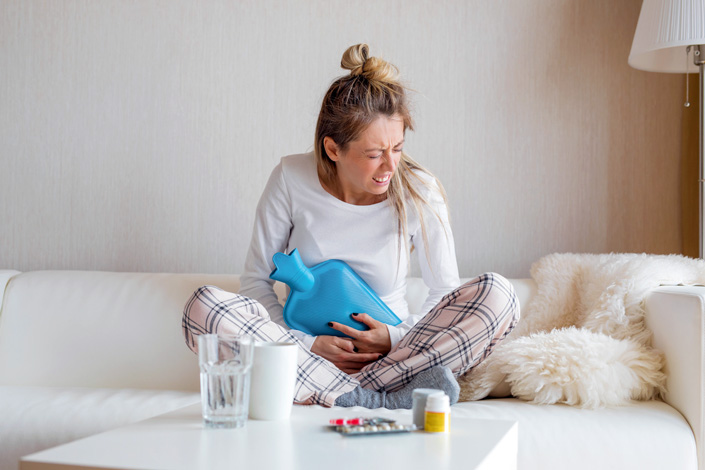 Other known causes include uterine fibroids, pelvic inflammatory disease, tumors or infections in the pelvic cavity, and abnormal pregnancy.

The condition is more prevalent among women who smoke, are obese, consume excessive alcohol during periods, or started menstruating at an early age. The main symptoms of this condition are:

Women may experience this condition for various reasons, usually related to biological changes in the course of life such as breastfeeding, pregnancy or menopause. It may also occur as a result of medications or health condition such as:

As with any menstrual disorder, early diagnosis and treatment will help to restore normal menstruation.

Other causes may include:

The condition can occur at any stage in a woman’s life, but it is more prevalent just before menopause or after puberty. Hypomenorrhea can be diagnosed through ultra-sonogram, blood tests, and other medical tests to check the thickness and the causes of scanty flow.

When to Call Your Ob/Gyn

If you have noted any of the symptoms associated with the above menstrual disorders, please contact your gynecologist for a consultation. Contact Kansas City ObGyn at This email address is being protected from spambots. You need JavaScript enabled to view it. or (913) 948-9636 to book an appointment today.