Pregnancy Tests: How They Work & What to Expect

How do pregnancy tests work?

There are two kinds of pregnancy tests: urine tests, which women can use in the privacy of their homes, and blood tests which must be done by an obstetrician’s office. The urine tests done at home are also run at doctors’ offices. Both home and office tests check for the presence of human chorionic gonadotropin (HCG) hormone in the urine. HCG is produced by cells that eventually form the placenta.

The hormone first enters a woman’s bloodstream when the fertilized egg implants into the lining of her uterus, sometimes as early as six days after the egg has been fertilized. After that, the levels of HCG increase very rapidly – often doubling every 48 hours for a time. Once the levels are detectable in a woman’s urine, her pregnancy test should show positive.

Eggs take about one week to travel from the ovary to the uterus after ovulation. The egg can be fertilized any time during its travels or once it reaches the uterus. HCG only begins production after the fertilized egg implants. It can be hard to predict exactly when fertilization occurred because sperm cells can live for up to five days inside the woman’s body. For this reason, most home pregnancy tests advise women to wait until they are at least two or three days late for their periods – or approximately 15 to 16 days after ovulation – before they take a pregnancy test.

The obstetrician might recommend a blood test done to determine the exact level of HCG in your system. Sometimes a blood test might be needed if they suspect a problem or are concerned about a possible miscarriage. There are two kinds of blood tests done at an OB’s office. A quantitative test measures the amount of HCG in the blood, while a qualitative test simply indicates if the hormone is present or not.

Women who have irregular menstrual periods may have a more difficult time scheduling an at-home urine pregnancy test. Irregular periods are those that have fewer than 21 days between them or that occur more than 35 days apart. Periods that vary from month to month are also considered irregular. In these cases, women should count 36 days from the start of their last period or four weeks from the last time they had unprotected sex before they try a home pregnancy test.

Of course, every pregnancy is different. A woman may produce more or less HCG in each pregnancy, and so she may have positive tests sooner or later in each one. Getting a negative test result or only a faint positive test result does not mean you are not pregnant. (This is called a “false negative.”) In these cases, you should wait a few days and take another test if you still have not gotten your period.

The earlier you take a home pregnancy test, the less HCG there is in your system. The best time to take a urine test is when the urine – and the HCG level – is most concentrated. For this reason, most tests recommend women test when they first wake up in the morning, and that they wait until at least one day after they have missed a period.

You should take a pregnancy test as soon as practical after a missed period or if you think you might be pregnant, following the guidelines above. The earlier you know you are pregnant, the sooner you can think about your options and get the care you need from an obstetrician.

How accurate are home pregnancy tests? Is there one brand that is better than another? 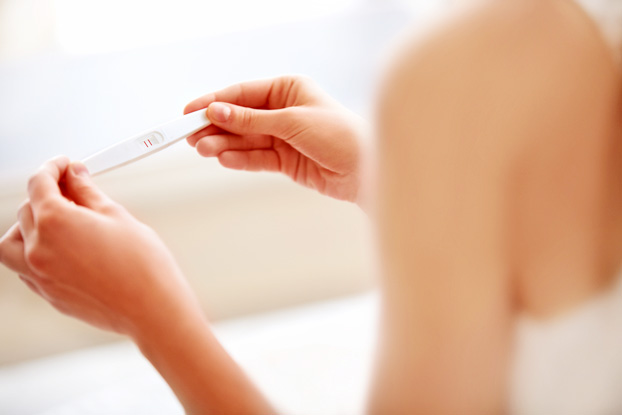 Even the best tests vary in accuracy from woman to woman because every woman ovulates at a different point in her cycle. Also, fertilized eggs can implant in the uterus at different times. Until the egg implants, the body does not start producing HCG for the pregnancy test to detect.

BabyCenter found that some home urine-based pregnancy tests are not as sensitive as they claim to be. Researchers evaluated pregnancy test results from multiple manufacturers. They found only one brand was 97 percent accurate with both their digital and nondigital tests in detecting pregnancy on the first day after a missed period. The other brands were only successful about half the time on the day after the missed menstrual period.

Several things can affect the accuracy of a home pregnancy test. If the woman takes the test too soon after she thinks she may have conceived, or if she did not follow the test instructions correctly, the test may not give accurate results. Some women never produce high enough levels of HCG during their pregnancy for home tests to measure it. To get the most accurate pregnancy test results, follow the test instructions exactly and take the test with your first urination of the day.

If you are sure you have waited long enough to take the test and have followed the instructions, and you get a negative test result, the odds are high you are not pregnant. Many other things can cause women to miss their periods. You should talk to the doctor if you are more than a week late and have not gotten a positive pregnancy test result. Because blood tests are far more sensitive to HCG than urine tests, the doctor will probably run a blood test to double check your pregnancy status.

Regardless of the results of your home pregnancy test, the official word should ultimately come from your obstetrician. If you have a positive pregnancy test or suspect you might be pregnant, make an appointment with your OB.

What is a “false positive” pregnancy test and how does it happen?

The woman may also have what is called a molar pregnancy, also known as a hydatidiform mole. This is a non-cancerous or benign tumor that starts when an egg is fertilized but does not develop normally. Instead, the placenta develops into an abnormal mass of cells and cysts. In some cases, an embryo begins to develop, but it is malformed and cannot survive. In other cases, there is no embryo at all. Molar pregnancies can have significant complications, and they require early treatment by a doctor.

Women who have early positive pregnancy test results, but get their period soon after that may have what is called a chemical pregnancy. This is a circumstance where the fertilized egg implanted as usual in the uterus, but only long enough to start producing HCG. After that, the egg stopped developing for some reason. Usually, this type of early miscarriage happens when the fertilized egg had some defect that prevented it from growing normally.

One potentially dangerous cause of a false positive pregnancy test result is an ectopic pregnancy. An ectopic pregnancy as any time the fertilized egg implants somewhere other than the main part of the uterus. Usually, this occurs in one of the fallopian tubes leading from the ovaries to the uterus and is called a tubal pregnancy. Sometimes, however, the egg implants in the abdominal cavity, the ovary itself or even the neck of the uterus or the cervix.

No ectopic pregnancy can proceed normally because the fertilized egg cannot survive. In fact, the growing tissue can destroy internal tissues of the mother leading to serious consequences including life-threatening blood loss. Early treatment of an ectopic pregnancy is essential to protect the life of the woman as well as her chances for future healthy pregnancies.

Other potential causes of false positive pregnancy tests may include:

Things that should not affect the outcome of a home pregnancy test include most other medications (including prescription and over-the-counter drugs, antibiotics and birth control pills) and alcohol. Women who are taking medicine that contains HCG should see her doctor to get pregnancy tests.

Regardless of whether you have a positive or negative pregnancy test result, call the doctor immediately if you have any of the following symptoms

These could be signs of a ruptured ectopic pregnancy, and they require immediate emergency medical care.

What is a “false negative” pregnancy test and how does it happen?

A negative result on a home pregnancy does not necessarily mean a you are not pregnant. “False Negative” means the test reads as negative even though the woman is pregnant. As discussed above, it can indicate you took the test before enough time passed, or you may have taken the test incorrectly.

Give your body enough time to produce the HCG needed for a positive result before taking a test. Also, most home pregnancy test kits come two to a box, so it is a good idea to take both about a week apart.

When should I call my obstetrician after I take a pregnancy test?

If you have taken multiple home pregnancy tests and gotten negative results each time, the chances are good you are not pregnant. However, if you have still not gotten your period after a week or so, contact your obstetrician. You may need further testing, or perhaps medication to help get your menstrual cycles back on track.

If you test negative on a home test, but still have the symptoms of pregnancy including not yet getting your period, nausea, fatigue and tender breasts, you should wait for a week and take another test. Also, you should have a blood test. Any woman who is getting different answers on separate tests should also get blood tests to detect pregnancy.

Of course, any woman who takes a home pregnancy test and gets a positive test result should contact her ObGyn, too. Your obstetrician will want to do blood work to confirm the pregnancy, as well as to make sure you are healthy. Seeing the doctor early in the pregnancy means you can begin prenatal care for the best possible maternal and infant health.

If at any point in your pregnancy you have unusual symptoms like feeling faint or dizzy, have vaginal bleeding or abdominal pain, you should contact the doctor immediately or call 9-1-1 for assessment and treatment.

If you believe you are pregnant, or have questions about a positive or negative result on your home pregnancy test, contact the obstetricians at Kansas City ObGyn online or by phone at (913) 948-9636.