September is Ovarian Cancer Awareness Month: What You Should Know 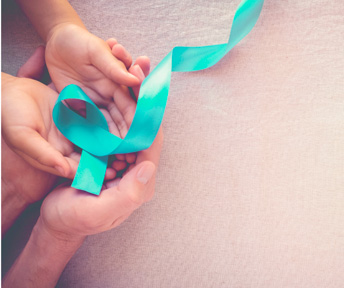 September is recognized as Ovarian Cancer Awareness Month. According to the American Cancer Society, ovarian cancer ranks fifth in cancer-related deaths among women, and the chance of a woman getting ovarian cancer in her lifetime is 1 in 78. Ovarian cancer mainly develops in older women with about half of those diagnosed age 63 or older. At any age, it’s important to know the facts about ovarian cancer.

What are Ovarian Cancer Risk Factors?

There are a few risk factors that are associated with ovarian cancer. However, it is important to note that having a risk factor, or a few risk factors, does not mean that you will get the disease. Risk factors are anything that increases your chance of getting a disease like cancer.

Pregnancy and breastfeeding both correlate with a reduced risk of ovarian cancer. Oral contraceptive pills also reduce risk, with greater length of use providing a greater degree of risk reduction. Intrauterine devices are also associated with reduced risk. Finally, tubal ligation surgery and salpingectomy (removal of the tubes) both provide women with a reduction in risk, with the greatest benefit seen with salpingectomy.

What are the Symptoms of Ovarian Cancer?

How Do They Screen for Ovarian Cancer?

Checking for ovarian cancer can be done at your regular well women health exam. During a pelvic exam, your doctor can feel for size, shape, and consistency in your ovaries and uterus. However, it is important to note that most ovarian tumors are very difficult to feel. Unlike a mammogram that can often detect breast cancer in its early stages, there is yet to be a screening test developed exclusively for ovarian cancer.

There are, however, two additional tests to the pelvic exam that can help identify ovarian cancer. These are the transvaginal ultrasound and CA-125 blood test. The transvagincal ultrasound or TVUS, uses sound waves to look at the uterus, fallopian tubes, and ovaries via an ultrasound wand into the vagina. The CA-125 blood test measures the amount of a protein called CA-125 in the blood. Higher levels of CA-125 are often found in women with ovarian cancer.

These tests are used in women known to be at a high risk for ovarian cancer, or in women with symptoms. There are no recommended screening tests for women who do not have symptoms and are not at high risk of developing ovarian cancer.

Have Additional Questions About Ovarian Cancer Risks or Screenings?

If you have additional questions about the risks of ovarian cancer or would like to schedule a screening, please contact Kansas City ObGyn today at This email address is being protected from spambots. You need JavaScript enabled to view it. or 913-225-8605.

Dr. Emily S. Minderman, MD has been practicing medicine since 2001 and is one of the founding physicians at Kansas City ObGyn. Women choose Dr. Minderman to be their ob/gyn because she is a compassionate, attentive listener, who truly enjoys getting to know each of her patients. She is proudly the mother of two.